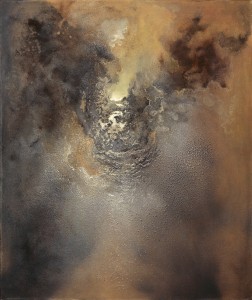 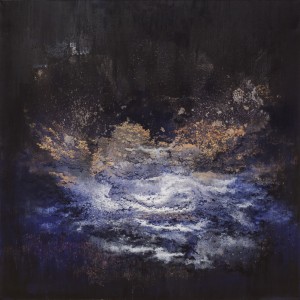 Although one of the main purposes of the Nepali International Arts Programme is to both promote awareness of the diversity, and cultural and artistic richness of Nepal’s arts and creative community, and to publicise and inform about these to international audiences.

The role of successful and internationally renowned Nepali artists, that are based outside of Nepal in practice of their arts, conveying their unique and important messages to non-Nepali people (from gallery owners to the broader general public) about the genius of the latter — effectively making them de facto Nepali ‘cultural ambassadors’ — is a phenomenon that cannot be over-estimated in importance.  The success of these figures working and based in the West, is not only a success for Nepal and Nepali arts but for, in the field of the arts, countries such as the United States and the UK where they are based.

Why? Because such figures are international level geniuses in their own right in terms of the creative vision they manifest and receive highest level acclaim for — rather than being artists that are technically brilliant in only Nepali arts, who happen to live outside of Nepal in such Western lands as the USA and the UK, and either teach or successfully sell their creations and receive commissions through being located in the latter.

These are rather, figures of international stature in their given fields of creativity, per se. Two of the most important examples are the New York-based fasion designer, Prabal Gurung, and the London-based painter Govinda Sah (Azad) two of whose works ‘Just Hope’ and ‘Wondering in Dark’ are shown above — the former’s success rests on the brilliancy of designs that are Not derived from Nepali couture, and similarly the latter’s paintings are not based on Nepali subjects.  Rather they are based on technical innovativeness allied to an awareness of human existential factors that resonate especially strongly to the London arts market and to the broader visual arts appreciating world of the UK’s capital (perhaps now the foremost centre for the flourishing of contemporary fine arts, in the world). 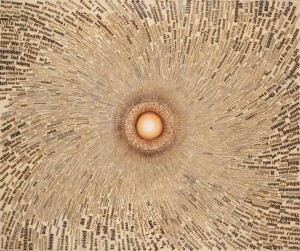 The presence of such a figure as Govinda, being based in London (Brixton) gives an accessibility to not only the London and UK contemporary art world (and by extention the broader Western art world) for Nepal’s most internationally renowned painter, but also too for the latter to access the vision and unique perspective that inspire the artist — a vision and perspective that are derived from the ‘experience’ of being Nepali and developing as an artist in Nepal. 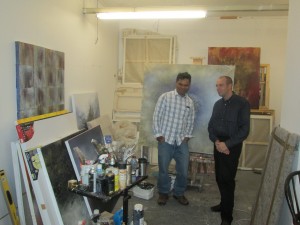 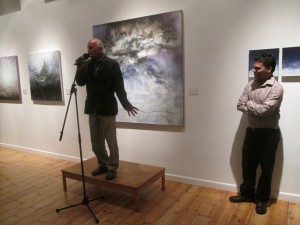 That vision is a highly spiritual one that through his paintings, helps to share in the UK arts world an understanding of art/painting that is not rooted in careerism but profound values about how art can convey the human experience, its sorrows and its joys, and teach about freedom from materialism and the very harmful burdens it brings to the heart and mind, that are all too well-known in the West.

More about the artist and his experience as growing up as an artist in Nepal, and the spiritual self-development that has shaped the subject-matter of his creativity and its message for artists in the UK & broader West:

‘I was one of six children, and our parents were illiterate and poor; to enable any of us to have some form of education often meant our parents had to starve.  At a very young age I quickly learned that art and developing as an artist were not considered to be responsible options.  This was a very important realisation that I quickly learned as a child, for whilst we all had notebooks (very expensive to have and buy) mine was quickly filled by my artwork, and so I had to steal when able, unused pages of the notebooks of my brothers and sisters, so that I could continue to practice art. I was often beaten by my parents for my interest in art, for they regarded it as irresponsible for it distracted me from developing skills that could be used for paid work.

My devotion to art was from the beginning one that saw me gain the realisation that I could not be content unless I was creating drawings and paintings, and that this was a spiritually-driven need and instinct.  I therefore never gave up as a child, or as a youth, despite my parents and family having little knowledge about art, and that to pursue it would result in beatings and harassment.  I therefore had great foucus for learning and developing my art, and this lead to in my mid to late teens, considerable technical ability that became increasingly knowm.  However my hometown in the Terai, was no place for artists to flourish, and I increasingly had found out that my story ewas shared by other young artists.

I moved to New Delhi, and found there both more subjects for my art, and also some opportunities to put my skills to practical use, that could earn me some money for my day-to-day basic needs of accomodation and food.  There in the capital of Republic of India, I was able to work as a signwriter, and I did some art & design work for an advertising agency, and — very importantly for my further spiritual development as a contemplative artist — I subsequently realised, painted works of the Gods and Goddesses to earn money; I also travelled to and worked in such famous cities as Agra during this period.  After some five years I returned to Nepal and joined in Kathmandu the country’s oldest arts college – at that time that all of my fellow students (unless from very wealthy [parents belonging to the main ruling ethnic group and caste]) had very similar stories to tell of being sometimes beaten, discouraged, harassed, and made to suffer and struggle for being artists against parental and family wishes.

At the end of that five years, in 1998, I had the idea of a cycle tour across Nepal, painting, and teaching about art to any who wished to learn about it’s technical skills and spiritual self-development purpose and value, in all of the towns I visited from the far east to the far west of my land.  The following year [1999] I was able to secure patronage and funding from Austrian Airlines, for the cycle tour initiative, which I began on 17th February 2000 and concluded in May of that year.  This was the time of the start of the Maoist Insurgency period in Nepal, which took place against a backdrop of increasingly brutal and injust monarchical rule.

In 2003 I completed my BA in art, and then started on a new and very important round of travels in Nepal and beyond; these were occasioned by wanting to move away from the sad plight of my beautiful land now in both city and country plagued by political chaos and armed conflict that witnessed the sorrow and death of so many of my fellow citizens.  At this time, reflecting on human experience I turned increasingly to spiritual self-development through practicing my art, and the realisation that this was bringing me to greater understanding of the universe, Nature and natural phenomena (such as in particular the air element, shown through clouds that in my land literally interconnect contemplative Man, as humble observer and student of Mother Earth and the cosmos) and humankind.  I went therefore up in to the remote and high places of the Himalayas, and there completed my formative years of spiritual self-development through the route of art.

I later left Nepal, and travelled again in the lands to the south; all of the time continuing to practice and further develop my art, as an increasingly, first and foremost spiritual practice.  I made new and further connections with artists at that time that enabled me to play an important part in an artists exhange and collective exhibition that was held in Dhaka, Bangladesh. At that time I also established strong and very supportive connections with the British Council Nepal.

Since that time further travels brought me to the UK to further pursue my journey of self-development as an artist with a spiritual vision that is perhaps uniquely Nepali, that began with me taking an MFA at the prestigious Wimbledon College of Arts.  Interaction with the London fine art world, that is The hub of the broader Western commercial art world, has enabled me to feel greatly privileged in representing Nepal’s contemporary fine art painting of a spiritual [not commercial] kind.

In the works that I create I feel that I am able to provide a visual abstract-art insight into the spiritual-contemplative passions and related creative reflections of artists living and working in Nepal, that bear witness to the unique spiritual and humanistic influences upon their work of many of the experience of growing up and developing as artists in Nepal, that is of such importance to share with Western audiences and the Western Art World, that would otherwise have no knowledge of such spiritual-orientated creativity — which is most important for Western people in general and artists in particular to be aware of.