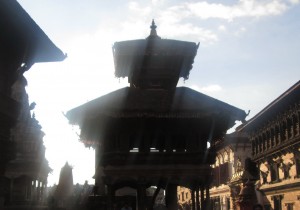 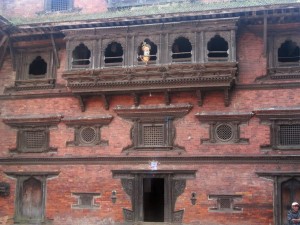 Traditional Nepali Architecture (Bastukala) is a branch of the broader arts family that is of great importance to Nepal and her people.

Why? Because architecture touches on such a wide range of topics, from the ancient Vedic science of Vastu Shastra, to a whole gamut of supportive arts and artisanship (such as sculpture and statuary, as well as woodwork and carving), to monumental temple and palace buildings, contemporary town planning and the place of contemporary Western influenced civic, recreational and office building, to rural, village and farm forms of utilitarian buildings (of which there are many forms across Nepal, from those in the upper Mustang area carved in to mountains, to traditional thatched roofing), and even shanty-type structures created for shelter for those living with minimal work or income.

In brief it affects the lives of every single citizen of Nepal, and of course is most striking to international visitors; making it the most accessible of all art forms for study and to define the history and socialogical composition of the nation.  Nepal’s architecture warrants major study for all who would come to know the great nation and people of Nepal, as the work and words of Rabindra Puri highlight (see below).

Traditional Nepali temple architecture may be said to be divided in to three main Styles — Pagoda: Stupa: Shikkar — and in the case of the first of these has in ancient times had a direct influence on Chinese architecture through the introduction from Nepal of the pagoda as a distinct feature of temple and monestry architecture (as opposed to other forms of this particular type of building), in conjunction with  the advent of Buddhism to China, and subsequently Japan and the broader East Asian cultural zone of the world.

Bhaktapur, a city near Kathmandu, in Nepal is renowned for culture, traditions and its ancient monuments. Bhaktapur is a clean and quiet city and is also known as the cultural capital of Nepal. As the race of civilization is at its highest peak, people are confirmed to turn this beautiful ancient city into a concrete jungle, not knowing the value of what their ancestors have left for them is a beautiful masterpiece of traditional architecture. … I wanted to build something that would catch the sights and thoughts of the people, and I wanted to set an example that how one could maintain the ancient architectural method building a house using the modern amenities without destroying its ancient looks and values. ……read more.

Article by Rabindra Puri about his Vision and Work, and support for the NIAP

The Architecture of Foreign Architects in Nepal

Nepal opened up for modern development only after 1950. Thereafter and as the experience of constructing modern building types was rather limited in Nepal, a wide range of foreign architects have worked and contributed to the architectural design of the country. Their involvement with projects in Nepal within the last fifty years has followed diverse streams and the production of architecture …. read more