In March the initiative of the Nepal Arts Council to make a flagship contribution to the Britain-Nepal Bicentenary of 2016, through a landmark photographic exhibition, took shape with a meeting at the NAC in Kathmandu with Alan Mercel-Sanca, Organisation lead for the UK Nepal Friendship Society, whose Nepal International Arts Programme [NIAP] (www.creativenepal.co.uk) was introduced at the 2015 Nepal Britain Society AGM in KTM a few days earlier.

It was at the society’s AGM in 2015 that Alan met Mr Sagar Rana, Vice President of the NAC, who on learning of the international dimension of the NIAP requested the support of the UKNFS in helping to develop the then conceptual level initiative for the Nepal Arts Council’s Britain-Nepal Bicentenary photographic exhibition that will be held in the Autumn of 2016 at the NAC building in Kathmandu. At the subsequent meeting (image below) that was arranged at the NAC (Alan attending with NIAP international communications officer, Deepak Tamrakar) the initiative was discussed in detail and work began in June/July, after a delay caused by the devastating earthquake of 25th April. 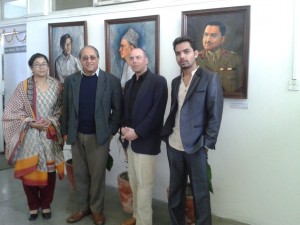 Nature of the project & description:

The vision of the project involved collecting together a unique collection of photographic reproductions of famous or symbolically important works of art (including sculptures and other artistic media in addition to drawings and paintings) from Nepal held in the archives and collections of the major world famous British institutes. These include amongst others, the British Museum, British Library, Royal Botanical Society (Kew and in Edinburgh), the Victoria & Albert Museum, the Royal Asiatic Society, Royal Geographical Society, Linnean Society, and others such as the Natural History Museum).

The project has involved each of the participating institutes contributing up to 10 works to be reproduced photographically with valuable accompanying descriptions. Currently (March 2016) most of the institutes have provided, or in act of providing sets of works for the project. In Kathmandu, the Nepal International Arts Programme’s principal facilitating organisation is the Bikalpa Arts Centre (www.bikalpaartcenter.org/) – image below taken at the BAC in March with its lead Saroj Mahato, who has a strong direct connection with the NAC — will be assisting Alan, where and if required, on behalf of the NIAP in relevant areas of the final state project as it is completed in the Summer-early Autumn 2016 period. 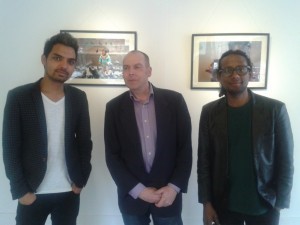 The UKNFS and the NAC are very appreciative of the special supportive part played by the guidance of Dr Mark Watson, Britain Nepal 200 Network coordinator, and to the curators and archivists of the institutes who have united in a spirit of great enthusiasm and excitement to support this unique project.

Through the collection that is being created, not only will a valuable information resource be created for all with an interest in the cultural heritage of Nepal, and Britain’s relationship with the Nepali people, seen through the medium of British pioneers who came to Nepal from the earliest time of the start of that relationship, but also a record of how that relationship was progressively developed with the British institutes.

The photographic exhibition will for the first time ever connect up those institutes in an initiative of great educational value for the Nepal & Britain of today, and of tomorrow, for their awareness of collectively making such a special contribution to Britain & Nepal’s unique relationship and friendship. Beyond this, the structuring of the resource being created will through its thematic structuring, be a valuable platform for sharing the story of Nepal’s great resources spiritual, cultural, artistic and physical/material: for this it is intended by the NAC and the UKNFS that the project will be a special resource and platform to connect Nepal with the British institutes, but also to assist with realisation of the many resources unique to Nepal, and promoting Nepal as an unparalleled cultural tourism destination in South Asia.