The April – August period has seen many developments of the NIAP in both the UK and Nepal: three of the most important are detailed here.

The UKNFS has been leading over the past year on the further development of the Nepal Art Council Nepal – UKNFS supported through the NIAP, Britain Bicentenary Exhibition project, the final stages of which are now underway.  More and more institutes and organisations — these include now the Gurkha Museum (Winchester) — have come to support this ground-breaking project, which will also in 2017 be utilised and progressively toured in the UK, starting in Edinburgh.

More details will be provided in October, ahead of the exhibition launch in Kathmandu in Mid-November.

The NIAP in Scotland:

The NIAP has been progressing strongly, including effecting important introductions through a Britain Nepal Chamber of Commerce delegation visit to Nepal in March: as a result we were able to help the three creative sector delegates, all of whom whose organisations were Scotland-based, including the Edinburgh Nepali Film Festival, Youth Juice Creative, and Scottish Contemporary Network.

We are very excited to be working with Susan Forgie and Alan and Neill Forgie on sharing development of awareness of Nepali arts in Scotland, and creative links between Nepal and Scotland through shared perspectives of their organisations, and aspects of the UKNFS’ NIAP.

In addition we are very pleased to welcome James Lamb, who has a long a special friendship with Nepal, and especially the Sherpa people; James has (July 2016) joined the UKNFS board, and brings his great expertise as a professional landscape photographer and promoter of adventure tourism derived from his passions for climbing and trekking, to the UKNFS, especially in regard to some aspects of the NIAP.

International News and Partnerships: MoU with the JWAS — the NIAP and support for Gender Equality

The UKNFS, through the NIAP, has recently signed an MOU with the Janaki Women Awareness Society.  We are delighted to partner with the JWAS and have outlined a number of areas for mutual support in realising goals for enhancing gender equality and combating women’s dis-empowerment.

One particularly important area of cooperation concerns promoting awareness of Mithila art, which is not only unique in style and spiritually charged in symbolism, but is also created by Nepali women of Janakpur and the Nepali Terai, who through there brilliant artwork also develop economic and social independence.  We will provide more information soon about how you can support the courageous highly important work of the JWAS through purchasing Mithila art. 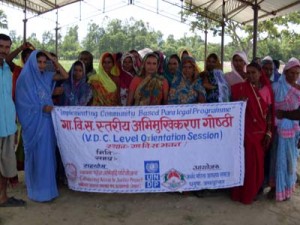 Janaki Women Awareness Society is a non-profit making non-governmental organization. It was established in 1993 in Dhanusha district of Nepal. The organization was formed and is operated by a group of women social workers. The formation of a democratic government provided space to the women social workers who were very much disturbed and concerned about the social evils of child marriage, Reproductive Health and HIV/AIDS, dowry system, domestic violence, Conflict affected people, Disabled, discrimination against women and lower castes. They decided to work in an organized way to uplift their economic, health, social and political conditions.

You can read more about JWAS by visiting their website.