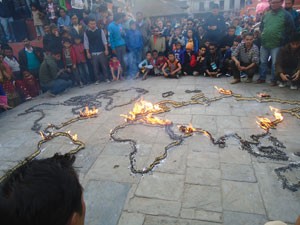 Climate change, the effects of pollution and traffic congestion in Kathmandu, and increasing depopulation of some rural parts of Nepal that are ineveitably diminishing or even destroying the socio-cultural integtrity of such local areas, are major causes of concern and justifiable preoccupation to the nation.

One of the main glories of Nepal is the fact that although directly unable to stem these major threats to the country’s natural and urban environment, so many artists, writers and documentary makers unite, passionately,

The recent (October 2014) ‘Art and the Planet’ is an example of this: ‘A biennial art and environment festival, that sees artists, environmentalists, and organisations come together for the environment cause  … read more.   Source: Nepali Times.com

A further article — Change Within, Change Without — in the Nepali Times, indicated how important is the role of the nation’s arts community in helping to develop greater awareness of how crucial it is for all of the People of Nepal, and especially its decision-makers to do all they can to address climate change, which is harming so much of the Himalayan regions of the country.

‘I have seen the Earth Change’ documentary film, that gives a valuable very practical insight in to the effects of climate change in Nepal and its impact.