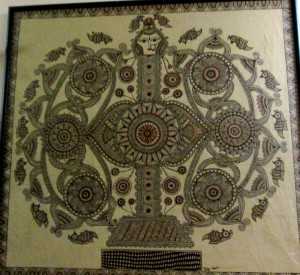 Mithila Art, is a distinctive form of artwork from Janakpur and the Eastern Terai region of Nepal: the name ‘Mithila‘ is associated with the  ancient ‘Mitha’ Kingdom [Videha Kingdom] — and the mythical King Miti — whose capital was Janakpur. It is also internationally important as an arts-orientated force for gender equality & women’s empowerment in Nepal and South Asia.

‘In the following we see that Mithila Art is wedded to the concept of democracy from a very early period, predating by millenia the emergence of modern democracy — this background and context has special significance for Mithila Art’s most internationally renowned characteristic: women’s empowerment, itself one of the fundamental strands of modern democracy and related egalititarian values as seen through gender equality.

It is said that the last king of the Janakas was of bad character. He was deposed by the public under the leadership of acharyas or learned men. Thereafter, Mithila remained without a king for hundreds of years. During this period, instead of a monarchy, a democratic system was followed under which the ruler was elected by the people and decisions taken in a collective manner …..’ read more.

Mithila Art itself, which is reputed to have originated in the 7th Century CE, takes many forms; from paintings (also known as Madhubani painting) to internal and external home murals, floor paintings (known as ‘Aripan’: see below) — drawn by female Mithila artists — pottery, through to textile creations of multiple utilitarian (see quilts project below) kinds and a number of handicrafts, and music forms. It is associated at a global, as well as South Asian, level with artistic [mainly paintings and murals] and handicraft creations as a means of women’s empowerment in a context of traditional male-orientated culture (and by extension and in practice female disempowerment).

‘Mithila folk art is a native art drawn on the auspicious and ocussions and religious celebrations by rural Maithili women of southern Terai of Nepal and Bihar in India. It is mainly divided into two groups: floor drawings or line drawings on the ground known as Aripan  … Aripans are mostly in the nature of semi-geometric floral design. Each diagram has well defined center on which an installation of a sacred pot, a plate, a basket or a seat is made for ritual purpose.

‘Mithila, the place of Maithili speaking territory of Nepal (mid-east, now Janakpur in Nepal and some Indian places in Bihar) was a very highly educated country thousands of years ago. It was in the period of king Janak (father of Sita). The country was very rich in arts of its own type and style, which is later called “MITHILA ARTs”.
Done in primary colors of natural origin on hand – painted wall hangings, wooden stools, miniatures in paper and leaves, stone pottery, bamboo and leather goods, and applique work. Mithila’s most famous and fascinating indigenous art forms by far, are its Madhubani Paintings on paper and cloth, they narrate mythological and religious events.
…. This art is a strict monopoly of the women of Mithila. They cover their courtyard walls in abstract images in brilliant colour, resembling in form and function the sand paintings of the Navahos. The art is a kind of traditional painting that reflects the natural environment including animals, people, life style, tradition and culture of the local people.The art of Mithila is linked to religious ceremonies, particularly marriage and its consequence, procreation. Interspersed with the Vedic marital rites, with the Sanskrit chanting by the Brahmins, is a tradition controlled by the women and devoted to female deities Durga, Kali and Gauri. During marriage ceremony the bride and groom are pulled away by the women for their own ceremonies devoted to Gauri in which men other than the groom are forbidden. Gauri is the goddess to whom the bride has prayed since childhood to bring her a good husband. These ceremonies are performed in courtyards before painted images of the goddesses. The function of the paintings being ritualistic the art is very symbolic. The primordial energy of the universe is embodied in various female forms, both living women and Goddesses….
Khohabar:

As the wedding ceremony is a special occasion in Maithili society, which is also known as “Kohabar” within the community, a separate room is set and decorated tastefully with several arts for its celebration. This painting is done in the inner as well as outer walls of the Kohabar Ghar (honeymoon house). As a popular social practice, its main motto is to increase the sexual potency and fertility of both the bride and bridegroom. This special painting is drawn on the walls of the house in three places: the Gosaighar (special room for family god), the Kohabar Ghar (honeymoon room) and Kohabar-Gharak-Koniya (corridor or outside of the Kohabar Ghar). … read more.
Source: WeAllNepali.com article by Bijaya Ghimire

S.C. Suman: Tree of Life article in the Nepali Times:

‘For centuries, humans have been obsessed with understanding the conscious and subconscious mind. We want to determine who we are and what we’re doing in the world. Do we serve a greater purpose, or are we destined to merely perambulate life but not fully understand? And what is our connection to the universe? These are the breed of questions that are evoked when experiencing SC Suman’s Mithila Cosmos: Perambulating the Tree of Life … read more.